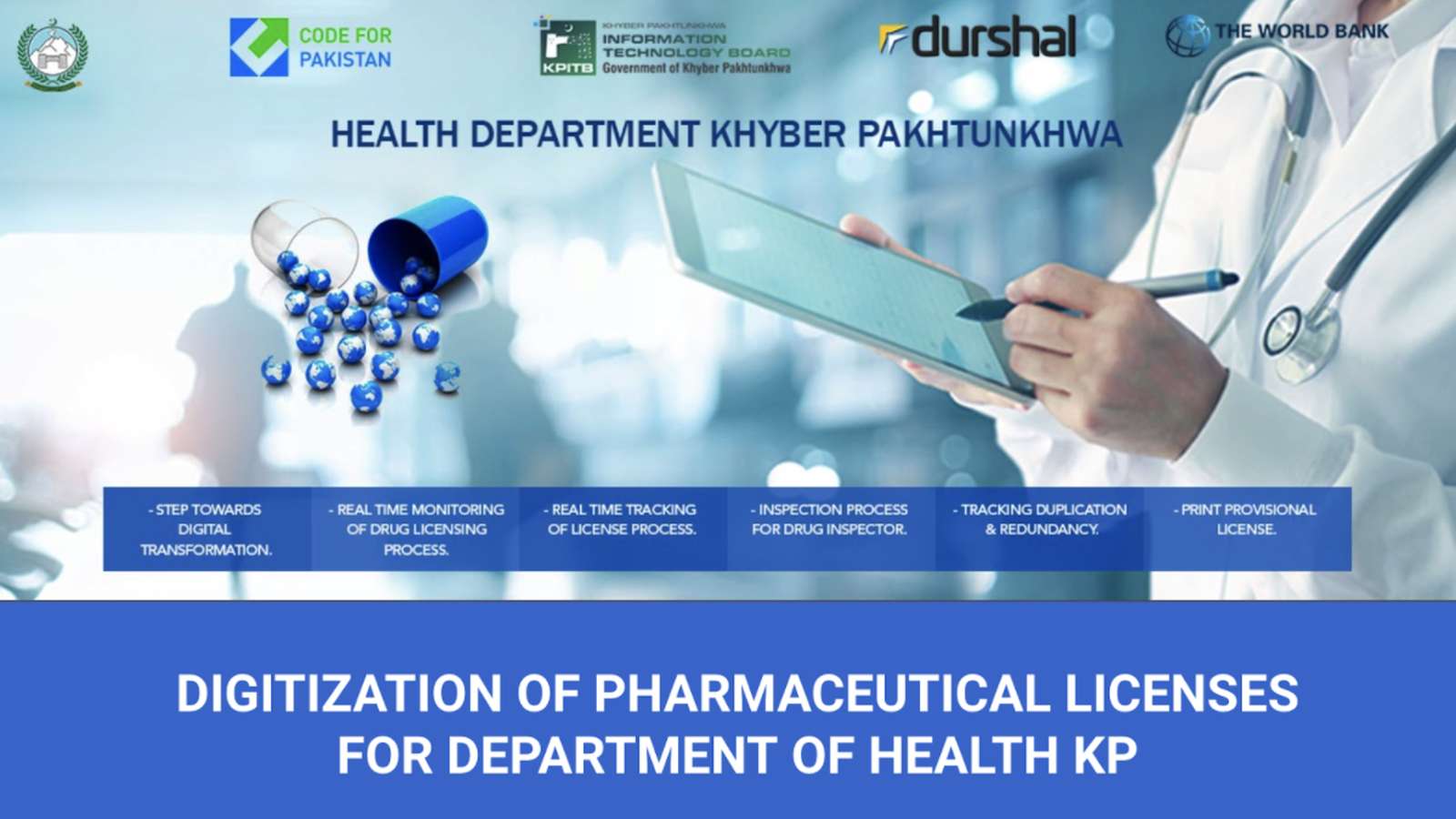 For the sixth cycle of the Fellowship Program, a team of Fellows partnered up with the Health Department KP to develop a new online pharmacy license registration system. The system replaces existing manual systems, which had issues ranging from delays in application processing to difficulties in tracking the authenticity of awarded licenses. With this online system, pharmacists, businessmen, and drug store owners across the province can now apply online to acquire a license to operate pharmacies and medicine stores. This blog post covers in detail why this digital solution was developed and shares the salient features of the online system.

Illegal pharmacies are a big problem in Pakistan. According to Pakistan Pharmacist Association, for approximately 4,000 licensed pharmacies in Pakistan, there are 100,000 other illegal merchants selling medicines.

With its rapidly growing population, the Khyber Pakhtunkhwa province has numerous discrepancies in the pharmaceutical sector. According to recent census estimates, with seven divisions and 26 districts, its total population has increased from 17.7 million in 1998 to 30.5 million in 2017. The vast majority of the population reside in rural areas (81%), with a few densely populated urban centers, including Peshawar, which has a population of 2.1 million. This rapid increase in population increases the demand for cheap medicines, leading to the supply of fake, unregistered, and smuggled drugs to the entire province.

In KP, there are 50 drug inspectors who are required to check around 12,000 registered chemist shops. According to officials, illegal drug stores outnumber the registered ones. An independent report by DG (Health) in 2019 revealed that there were 2,500 registered drugstores in Peshawar but there was no official record for them. Furthermore, 600 drug licences issued in Peshawar were found to be fake on verification.

From 2014 to 2018, reportedly 66,879 inspections were carried out, 1,471 drugs were declared substandard and 146 spurious, 2,322 pharmacies were sealed, 72 FIRs were registered and courts decided 544 cases with the convicts being awarded fines and jail sentences.

Following the passing of the Pakistan Pharmacy Act 1967, the Pharmacy Council of Pakistan was established. It has the mandate to protect, promote, and maintain the health, safety, and wellbeing of patients and the public who use pharmaceutical services in Pakistan. There are 52 institutes of pharmacy recognized by the Pharmacy Council of Pakistan; despite this, malpractices and illegal pharmacies are operating within the country. Moreover, unregistered and substandard medicines are frequently sold at many pharmacies, and the general public is often unaware about this lack of competence and the danger that these pharmacies pose.

As part of the efforts to reform the health sector of KP, the Health Department and Directorate General Drugs reached out to the KP Government Innovation Fellowship Program team with the request for digitizing and automating the process of issuing licenses to drug stores and pharmacies in the province. Previously there was no centralized online system where drug store owners could apply online, saving their time and money and expediting the process on the department’s end. Similarly, the Health Department also faced issues in tracking duplicate and fake licenses resulting in illegal pharmacies operating throughout the province.

Therefore, the department needed an online platform where:

After a careful review of the problem statement, the Fellowship team proposed creating a fully centralized online platform to digitize the process for license application, renewal, and verification for pharmacies in KP.

Three Fellows, Muhammad Awais Khan, Asfandiyar and Abbas Khan (get to know more about our Fellows here) collaborated with the Health Department to develop the online platform. According to the team’s user research, it was evident that the manual processes for license registration had problems. Responding to a question on how many days it takes to acquire a license, most of the respondents, which included pharmacists and businessmen involved in the sale of drugs in KP, said it takes approximately three weeks to a month to acquire the license.

Among other things, the respondents also wanted a more efficient and simple process which required fewer in-person visits to the department to fulfil the requirements of obtaining a license .

Based on the user research, the Fellowship team created a fully centralized online platform to digitize the process for license application, renewal, and verification for pharmacies in KP Province. The system includes the following modules:

The online system has been developed using modern development methodologies and has been built with operability and sustainability in mind. The online system is easy to use for both license acquisition and issuance. The system is accessible through any internet-connected desktop, laptop, tablet or smartphone, on all major internet browsers. The system’s UI and UX are optimized for both desktop and mobile screens with vibrant colours, legible menus, and easy navigation. The system’s snapshots in action are shared below, which illustrate the usability of the online system.

This digital solution is designed to transform the entire process of pharmaceutical license application, renewal, and verification.

Deployed in December 2020, the system will transform and streamline the department’s record keeping processes, improving oversight for detecting discrepancies and other shortcomings in license issuing processes. Since the process will be shifted online, it will reduce the time it takes to issue new licenses, verify existing licenses and renew licenses. It will enable performance tracking of inspectors, with built-in performance tracking mechanisms. The system’s most significant impact will be bringing transparency in the pharmaceutical sector and ensuring that only registered pharmacies are allowed to operate in the province with improved oversight and control of the Health Department.

Ibraheem is the Program Manager at the KP Government Innovation Fellowship Program. He comes with an entrepreneurial background, with a keen interest in Social Impact Ventures, Civic Innovation, and Community Mobilization through technology.