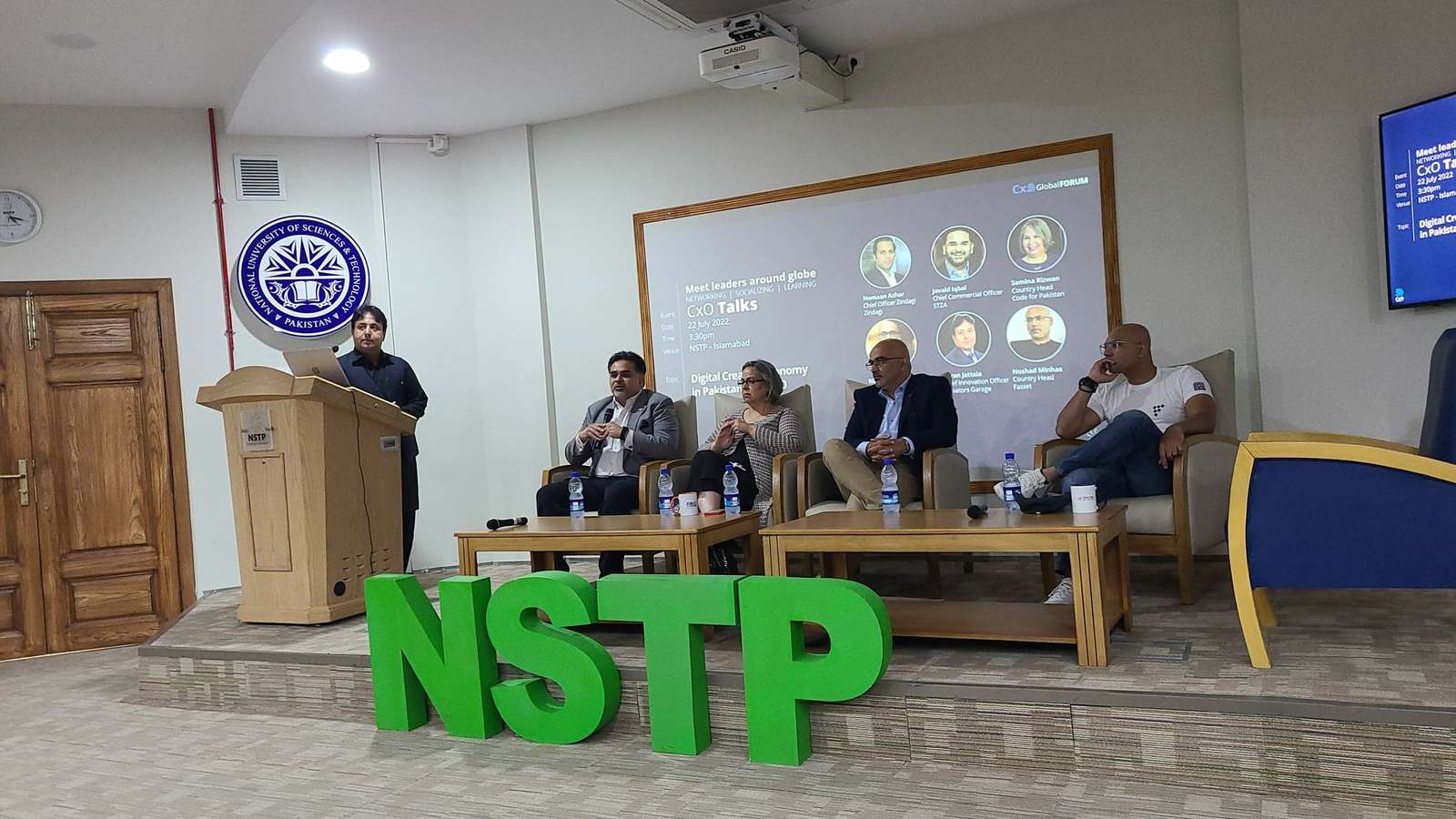 Fulfilling professional experiences should be shared, whether to offer learnings or to simply strengthen our bond as participants in the Pakistani tech ecosystem. One such, a few days ago, was a group of learned people with the choicest of anecdotes who came together at NSTP for a panel curated by CxO Global Forum, entitled “The Digital Creative Economy: Web 3.0”. Panel discussions are engaging and valuable when the participants hold solid experience in the subject matter, are not afraid to speak their mind, and have a sense of humour. It helps to not take oneself too seriously, and to listen and learn equally from the audience as they learn from you. This one was amongst the best in a long time, and I was privileged to be a panelist. We are in the eye of a perfectly brewing storm of the global digital creative economy, fueled by Web 3.0. Techies love jargon, and we take pleasure in sequencing evolution; nice and tidy, structured — the way techies think. But life is not sequential, nor is there an acronym or catch-phrase for every development milestone. Jennifer Pahlka, Executive Director of Code for America, stated a decade ago that many different developments within the Web’s collective intelligence are progressing simultaneously and deserve attention. Traditionally, utility has driven technology adoption, not vice versa. With Web 3.0, is this theory turned on its head? Is it driving utility, by virtue of the unprecedented possibilities it presents? A near “Black Swan” event, Covid 19 — albeit traumatic — has ironically been a boon and a bane for humankind. While precious lives are still being lost, we discovered that it is in our power to heal mother nature, and society shed its inhibition of technology and applied it effectively to transition into an unfamiliar lifestyle. The evolution of the Web underpinned this; it seems for the better. So, before plunging into the Web 3.0 wave, one may ask “what will these new technologies mean for our businesses, our lives, and our ecosystem?”.

The panel discussion centered on the positive impact of Web 3.0 on the private sector — cryptocurrencies and blockchain, agritech and IoT, gaming and virtual reality, AI powered decision support; “machine to machine” internet communication enabled by the semantic web and microformatting and coupled with powerful data assets, helping consumers get more targeted information. There wasn’t much reference to the public sector.

Having transitioned from big tech and profit-making to civic tech and the non-profit diaspora, my focus is on harnessing the power of people and technology to build a better, citizen-centered ecosystem of governance. So, this was my take on what the Digital Creative Economy and Web 3.0 mean to Code for Pakistan’s mission.

Big tech holds virtually all the world’s data, typically held in closed and centralized structures, and is gatekeeping it for influence and huge commercial gain. Gavin Wood, the father of Web 3.0, states that it offers structural changes which render the current ecosystem obsolete by shifting “ownership” of data to consumers, much as we own physical assets, thus releasing the monopoly and empowering consumers to utilize the data in ways most suited to them. Universal access to government data, availability of open source tools, and a citizenry ignited rather than inhibited by technology is a powerful equation resulting in the democratization of power. It drives the participatory process between government and citizens which, ideally, results in good governance.

The challenge of effective communication, between government and citizens for better governance, is prevalent across all countries, with a few exceptions. From cradle to grave, government “lingers” in citizens’ lives; the government would like to own comprehensive citizen data in a secure environment, and while citizens typically do not resist providing data, they would like a stress-free process of collection. Both parties earnestly intend to cooperate for better service delivery, but often effective communication remains friction-ridden due to broken processes, poorly functioning solutions, apathy of government workers and exhaustion of citizens. It is a master-slave relationship which is unequal, undemocratic, and unjust.

Enter Web 3.0! Naysayer's opinion is that while Web 2.0 was for people, Web 3.0 is for data. Well, even if it is, it goes without saying that access to data can change individuals and societies for the better. Web 3.0 accelerates expected results as envisioned by the open data movement.

It provides a mechanism for the government to enter and exit citizens’ lives more fluidly. Government services and data being available on the web in machine-readable format enables developers to search for useful data points and deliver these, or insights from them to citizens. Compare this to Govtech of the earlier wave where one suffered a stressful process of data-hunting on government portals. The multidimensional representation that Web 3.0 facilitates, empowers constituents with real-time information with photo-imagery and videos, or 3D virtual reality.

The unprecedented mass of data has given form to citizens’ demand for open data policy, primarily to ensure transparency of citizens’ data usage by the government and for the government to reveal the data it holds for evaluation and usage by citizens. Web 3.0 and open data force governments and citizens to stop pulling in different directions and align to achieve this. As democratic equals, government and citizens can together end the master-slave relationship and engage with each other with a spirit of mutual respect.

Much more was discussed during the panel, but I shall leave some of it for next time. What I described during the panel and summarized above is, perhaps, a proactive government-citizen utopia boasting harmonized objectives, flawless execution, and iterative assessment for improvement. If only! Of course, challenges remain regardless of Web 3.0, and many of these are embedded in attitudes and vested interests — variables often not addressable through technology. Insufficient data cleansing renders datasets erroneous and insights compromised, there seems to be no agile process for independent programmers to report errors and receive timely response, and many governments still dodge the open data movement because they fear the empowerment of citizens to criticize publicly.

Regardless, the writing is on the wall. As Victor Hugo said “nothing is more powerful than an idea whose time has come”. As technologists, we may modernize Victor’s observation by supplementing “idea” with “technology”. Democratization of power is a formidable idea whose time has come. Fueled by the open data movement, which is built upon the evolution of web technologies, the emergence of the Digital Creative Economy, and a technology-native young world population, optimally good governance is around the corner.

“Another world is not only possible, she is on her way. On a quiet day, I can hear her breathing”— Arundhati Roy.

Written By: Samina Rizwan, Country Head at Code for Pakistan.