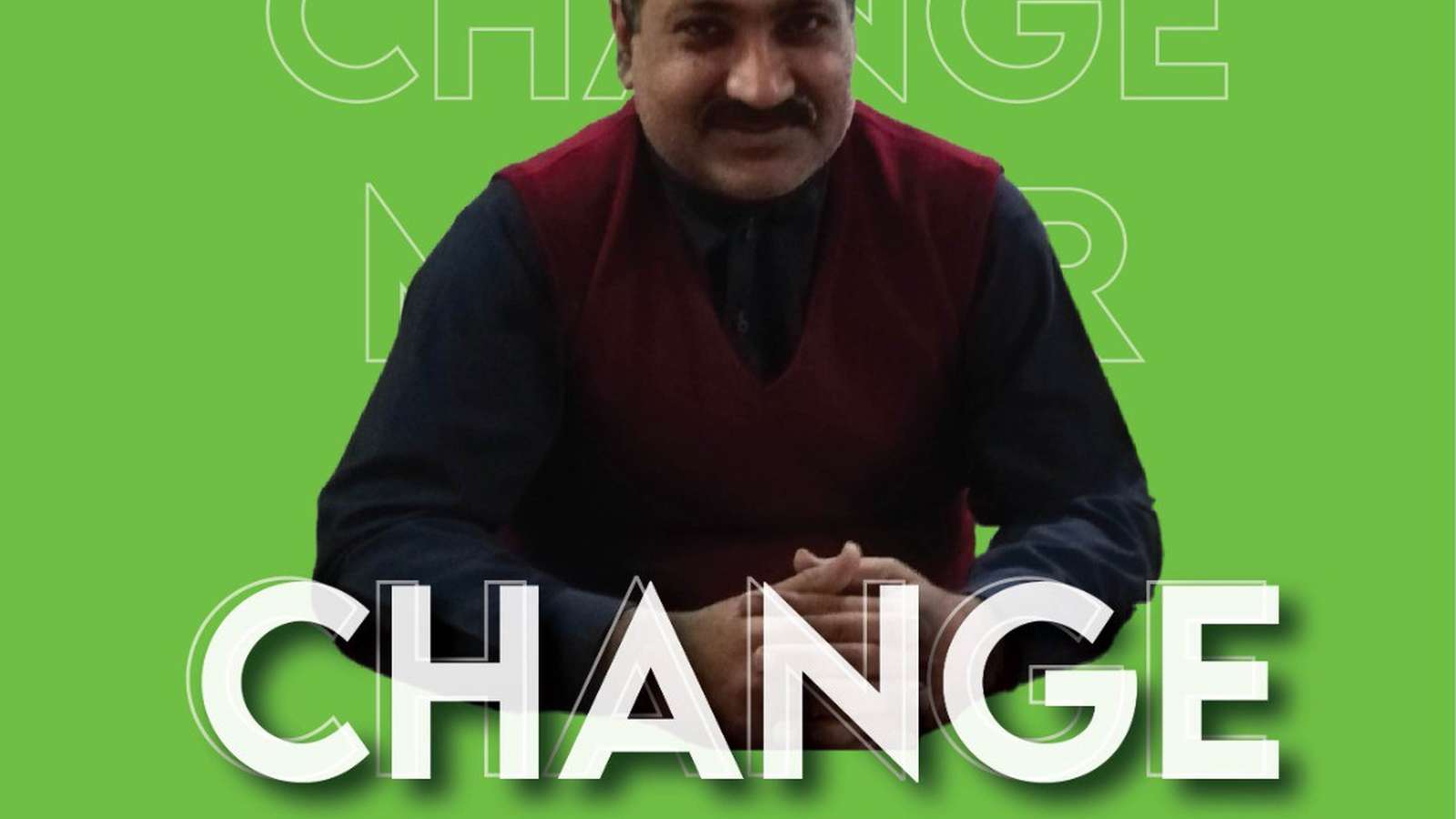 💡 In 2019, the Directorate General of Livestock and Dairy Research — a provincial agency responsible for managing various laboratories of veterinary sciences, livestock and dairy farming — was facing serious challenges that made it hard to fulfill its mandate to ensure healthy and productive animals.

The Directorate of Livestock and Dairy Development Research — a provincial agency responsible for managing various laboratories of veterinary sciences, livestock and dairy farming — is located on Bacha Khan Chowk, Peshawar. The building is instantly recognizable as a government structure. It’s a broad colonial building that has been stained a fresh coat of white, and is in stark contrast to the building behind it — an older, grayer block — which houses my destination. I’m headed to an office room labeled Information Technology Cell, where I’m supposed to meet a grade 17 IT officer, Mr. Arshad Ali.

The lackluster quality of the office is at odds with the personality of the man. Arshad Ali seems most out of place. Tall, middle-aged, instantly chatty — though with thoughtful demeanor — he has been in the department for almost a decade. The snail pace of our rigid government system that puts off even the best of officers hasn’t dampened his spirits. It doesn’t look like it will, either. A self-driven officer, he keeps up to date with the latest technology in veterinary care through regular chats with an old college friend, who is a doctor now in the UK. To improve his reports with better analysis, he learned Microsoft Power BI by watching YouTube tutorials.

💡 The World Food Programme (WFP) estimates that 43% of Pakistanis are food insecure and 18% of those have acute food insecurity.

He is interesting and quirky, I find. I learn that Arshad has self-relegated himself to the old administration block. Within that newer, pearly-white structure that you first see when driving up to the Directorate, there is a work desk dedicated for Arshad. Colleagues have urged him to come join the rest of the team in the new building, but Arshad just can’t see himself leaving the IT room.

“It’s not about nostalgia,” he tells me. “It’s about identity.”

He was aware that his department was facing serious challenges. All labs were operating on manual registers and cash memos; there was no mechanism for quick generation of reports, analysis and prediction of epidemics (in cattle); and there were frequent delays in preparation and implementation of precautionary measures.

So even though the labs were fully equipped, lack of digital automation slowed the entire process down.

Arshad had thought about the problem in the years he had spent working at the Directorate. He saw how inefficiencies of the system were also affecting his colleagues, the vet doctors and the researchers. Morale was at an all time low.

“We were keeping manual data; it’s hard to keep a track of it, let alone conduct any deep analysis of it. I remember in 2012, a student researcher requested access to the data registers. Unfortunately, he lost the registers and with it, we lost a few months of data.” ~ Dr. Mohammad Shaheen, Senior Research Officer (PhD in Pathology)

Arshad knew his work was cut out for him. The biggest hurdles that government departments face (generally across all levels) is a lack of resources, both technical and monetary.

It wasn’t too long after that when Arshad Ali received an email from KP IT Board (an autonomous public sector organization promoting IT in the province) and Code for Pakistan. It was an invitation for all provincial government departments to submit problem statements and help identify issues that could be solved using technology.

Arshad was pleasantly surprised and, in an adrenaline rush, he wrote back with a long list of problems that his department desperately needed to tackle. Code for Pakistan, which partners with the World Bank and KP IT Board, manages the KP Government Innovation Fellowship, which inducts around 20 Fellows every year to work with government departments to create digital solutions. Due to the highly selective nature of program — both in terms of Fellows and projects — only a handful of departments are selected each year, and unfortunately for Arshad, his problem statement didn’t make it through.

💡 Conceived in 2014, the KP Fellowship Program is a 6-month program designed by Code for Pakistan, and supported by the KP IT Board, and the World Bank, where a team of talented young professionals collaborate to build digital solutions, inspire citizen engagement, improve government, and show how to innovate in public services.

It was a setback, for sure. But In 2020, when Code for Pakistan and KPITB reached out to provincial departments again, Arshad was prepared. He distilled his problem and solution into a single sentence.

“What my department really needs,” he wrote, “is a Lab Information Management System (LIMS) that could digitize the data entry process and keep records of test results.”

Arshad Ali was excited to to hear that his problem statement was among the 8 selected for the 6th Fellowship cycle. Meanwhile, Code for Pakistan was shortlisting 20 Fellows from a list of over 6000 applicants. These Fellows would be trained, divided into smaller teams and assigned projects to work on.

The KP Fellowship Program was on schedule until COVID-19 threatened to derail it all. Cities, countries and even continents closed down. Hospitals were overcrowded, offices were empty, and uncertainty took over our lives. The KP Fellowship office at Durshal — a co-working space in Peshawar — and most of the government offices shut down indefinitely. Even as the world tried to respond, there were few answers and no end to it in sight.

Reflecting the agile mindset of the Fellowship, in only a month’s time, Code for Pakistan’s team restructured the program so that it could be executed remotely. The curriculum was redesigned to facilitate remote work.

While the Fellows were under training and adapting to what Code for Pakistan tried to establish as a new normal, Code for Pakistan’s Government Liaison, Nazim Uddin, met with government focal persons to better understand their department’s problems. One of the people he met with was Arshad Ali, who briefed Nazim about the existing baseline data and departmental requirements.

With clearer understanding of the problem, Nazim reported back to the team and they began developing a solution that would solve the Directorate’s problem.

The Fellow assigned to lead the project was Usman Khan, a software engineer with expertise in web programming and code debugging.

Originally from Swabi, a village that sits on the banks for the Indus River, Usman had rushed to submit his application when he first read about the KP Fellowship Program online. He was desperate to get in and terribly upset when he didn’t, but Usman’s determination — like Arshad’s — never wavered. As Usman tells this story, his plan would be to spend the next twelve months building up his skillset so he’d be in a stronger position the next time he applied. He secured an internship at KPITB, where he developed two Management Information Systems and got a preview of how government operates. Post-internship, he found a job in a private software house, and developed an Enterprise Resource Planning System for an international client. After office and into the wee hours of the morning, Usman would sit for hours in front of his laptop, tirelessly learning new technical skills by watching YouTube tutorials and putting those newly-learned skills into practice. In 2020, after a yearlong wait, he took another shot when Code for Pakistan announced a call for Fellowship applications. This time, he got in.

He was overjoyed, Usman’s interest in civic tech by now had flourished into passion. As fate would have it, Usman would work with Arshad Ali as he was assigned to work on MIS for Directorate of Livestock & Dairy.

There are 6 labs in and around the Directorate, where 13 types of lab tests are conducted. Because of the LIMS developed by Usman and his team, all test results are now automated and stored in a database for the department. With data pouring in, doctors at the department are hopeful that with 18 months of data, they can focus on analyzing, identifying patterns, and working on vaccines.

GovTech is not just about improving government backend systems, but also about creating internal processes that ultimately benefit the citizen. On the citizen-facing end, Usman led the Fellowship team in ensuring that citizens using the lab could access results easily online, which would save them from making multiple visits to the department. As a younger generation of Pakistanis — equipped with smartphones and access to the internet — enter into the cattle farming industry, mass use of this service is not difficult to imagine.

💡 GovTech is a whole-of-government approach to public sector modernization and promotes simple, efficient and transparent government with the citizen at the center of reforms.

💡 The Lab Information Management System helps the department in the following areas:

1500 lab test results have been recorded in the online system (as of March 2022). Generating an analysis report now takes 1–2 minutes, down from the 20 hours it took previously.

Building on the success of LIMS for the Department, Arshad Ali reached out again in 2021. The latest batch of Fellows is helping the department to incorporate more labs and tests into LIMS.

But as far as Arshad Ali is concerned, he will never be done innovating. As he enters the DG Livestock, walking past the new structure and into his office in the Administration Block, he is talking to me about plans to collect test results of all livestock labs across the province and storing them in a centralized database.

Whenever his resolve wavers, he takes a moment to look at the wooden sign outside his office door that read Information Technology Cell, and reflects on ways that technology can improve his department.

In recognition of his efforts to improve the department, Arshad Ali was promoted and he is now proudly serving the same department as a Grade 18 government officer.